【COUGAR DUALBLADER Fastest review in Japan】Both regular and gaming mice can be customized!

I am Layton, the blog manager.

This time, I will be talking about the COUGAR DUALBLADER, which I have really wanted since its product launch.

n’t wait for its release in Japan, so I imported it from Hong Kong.

But, On August 24, the day it arrived, there was an announcement that it would be released in Japan on August 30.

This made me laugh.

We will explain this as a review of the actual device a little early, as it is thought to have the same specifications and chassis as the version released in Japan.

We expect that the specifications will probably be the same in Europe and the U.S., but please consider that some details may differ.

Want to see a review of the COUGAR DUALBLADER before it goes on sale.
Those who find customizability appealing.
Those who work on one PC for both work and personal use.

Japanese version is also available. If you prefer Japanese, please click the link below. 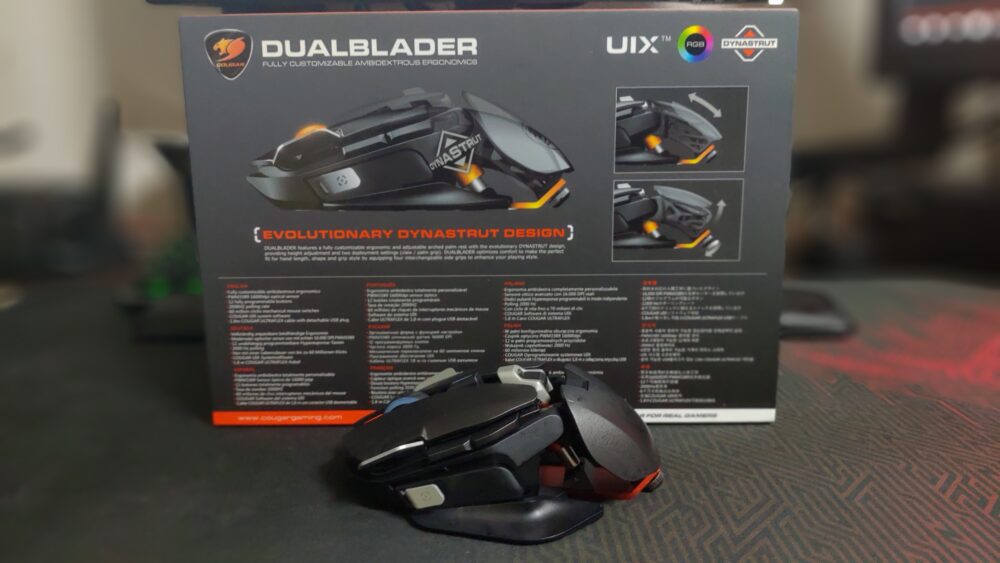 【COUGAR DUALBLADER Fastest review in Japan】Both regular and gaming mice can be customized! レイトン Welcome to L′s Info Blog. I am Layton, the blog manager…

We have also prepared a review article of the COUGAR 700M EVO, the predecessor of the COUGAR DUALBLADER introduced in this issue.

Conclusion : Is this mouse recommended?

I would definitely recommend it to those who enjoy the customizability of buttons and grips that ordinary mice do not have.

This product is primarily designed for customization of the side grip and additional buttons, and a 3D printer can be used to create more personalized parts in addition to the included parts.

For those who love customization, this is a gem that shows new possibilities!

However, I am not sure it will be very attractive to those who do not customize.

So,in detail, what is the attraction?

Don’t worry, I will explain in detail later.

The COUGAR DUALBLADER continues the hybrid aluminum-plastic design of the previous COUGAR 700M EVO, additional buttons looks like all made of aluminum.

The lighting areas are the wheel and the DPI button, As with previous models, and the lighting color can be changed by using the dedicated software “COUGARs UIX™-System“.

The best-selling feature of this mouse is the additional buttons, of which four can be added in total.

And what has evolved from the previous work is the option of not using any additional buttons.

This also allows for an “infinitely more normal mouse configuration”, which was not possible in the previous work.

For my part, I prefer a gaming mouse configuration that is designed more for gaming, but I believe that I can recommend this style to a more general audience than the previous style.

In the previous 700M EVO, the grip was adjustable only with the palm rest, so it can be said that this improvement allows for more fine-tuning of the size.

In the COUGAR DUALBLADER, the cable is a detachable wired connection, although the cable is not shown in the photos so far.

The cable type will be a general USB Type-A to USB Type-C cable.

The Type-C part in the photo has a slightly special cover, but it has a shape that can be used both as a dedicated cable and as a cable for charging a smartphone.
※I tried to see if I could connect with commercially available USB Type-C, but I was able to do so without any particular problem.

Advantages over previous work
・Compared to the previous model, the new model is lighter and easier to handle.
・Interchangeable side grips on the left and right sides for a better fit in the hand.
・Height adjustability supports changing the way the mouse is held.
Disadvantages compared to previous work
・The elimination of additional weights prevents fine weight adjustment of the mouse.
・Side grips are now detachable, so there is a possibility of damage or loss.
・The cable is detachable, so if the USB Type-C connection port is damaged or defaced, it will be impossible to use.

The table up summarizes the differences in basic information.

1. Shape change of side grips

As for the height adjustment in 2., the 700M EVO had a shape similar to a claw style to some extent, but the DUALBLADER has an adjustment function that allows the user to change between a claw style and a palm style.

Advantages
・Additional buttons are freely replaceable, so you can customize it to your liking.
・Rigidity is higher than other mice due to the use of an aluminum frame.
・Macro settings are easy to set up, so it can be itched in various situations.
Disadvantages
・A little heavy for the trend toward lightweight.
・This product is wired, so it is troublesome for those who want to eliminate cables as much as possible.
・Special software is required to set macros, and macros cannot be saved on the device.

I would like to move on to a review of the use of the product, which is of interest to me.

In conclusion, I think the design is more in line with a wider range of users since the previous 700M EVO.

The ability to detach additional buttons allows the user to choose whether to use a regular or gaming mouse from the previous fixed button layout, which is a much appreciated feature.

As a matter of course, you generally buy a gaming mouse and a gaming keyboard to play games.

However, it is not uncommon to have a PC for work and a PC for playing games together.

Some people may “want to set up macros with minimal buttons” for work, but “need more buttons” when playing games.

This mouse, which can solve such problems, is a product that satisfies some niche demands.

As for durability, we don’t think there are many elements that could break, except that the additional buttons are magnetically attachable.

I guess we will find out if the additional buttons, which are magnetic, are trustworthy after using them for the next few months or so.

Nevertheless, since the button itself is aluminum and uses magnets only for connection to the body, if no problems occur on the body side, doing something to the additional button side should not be a factor in breaking it.

n this article, we discussed the COUGAR DUALBLADER.

This mouse, which has evolved from the previous 700M EVO mouse, was a real hit with me, and I have been waiting for it ever since it was announced.

The trend in gaming mice these days is to reduce weight, and I think the COUGAR DUALBLADER is a good gaming mouse that is also lightweight and has expandability with the additional buttons.

The price was confirmed to be 13,200 yen on Amazon Japan for pre-order.

After August 30, review articles and review videos will be published by others, but if you have any questions or comments, such as “I would like to see more explanation of this part on Layton’s blog!” or “I want to see what the details are like on the actual device!” If you have any requests, we would appreciate it if you could let us know in the comments section.

We would be happy to add it to the article or reply to your comment.

I hope this article has been helpful to someone. See you soon.

【COUGAR DUALBLADER Fastest review in Japan】Both regular and gaming mice can be customized!

What is the service SOS Mail Solutions?